Most people will immediately think of Heineken if you introduce the concept of Dutch beer, and possibly some other pilsner style beers like Grolsch, but they are not likely to think about other styles of beer like Indian Pale Ale (IPA) or stout. At the turn of the 21st century, when Arendsnest opened this was very much the case, and at that time there were approximately 40 breweries in the Netherlands. This meant that finding an assortment of different Dutch beers was more of a challenge, but the team found diversity and Arendsnest was opened in 2000 by Michael Jackson (the chap who writes about beer, not the late recording artist of the same name).

In the ensuing period both Arendsnest and the Dutch beer industry have grown from strength to strength, and there are now approximately 400 breweries to choose from. Arendsnest offers a fine selection with 30 beers served draught at any point and more than 100 beers in bottles. Some of the beers are regular fixtures but there is also a very regular flow of new beers being served through the taps, with changes so frequent that you could almost try a new draught beer every day (an interesting challenge…).

If the prospect of beer doesn’t really appeal then there is also a selection of other Dutch drinks, notably a selection of jenever and whiskies all distilled in the Netherlands. The only non Dutch drink in the house is Fritz Kola (a cola drink, just in case) and this comes all the way from Germany.

With so much to choose from identifying a favourite is never going to be easy, but the Mooie Nel from Brouwerij Jopen in Haarlem is one of the more popular beers at this fine establishment. This is a lovely smooth IPA with three types of hops, and is so inspiring that there may be a visit to Haarlem soon to trace the beer to its source. Arendsnest also has a house beer called Bald Eagle that is brewed in partnership with Brouwerij Kees and is usually available through the taps but sadly it was not on sale when we visited (but we were reassured that it will be back very soon – a temporary surge of demand over supply). The bar staff are very knowledgeable about beer so if you’re slightly daunted in the face of so many beers to choose from just ask. There should be something to meet the taste of pretty much anyone and you might find something new or even a new favourite 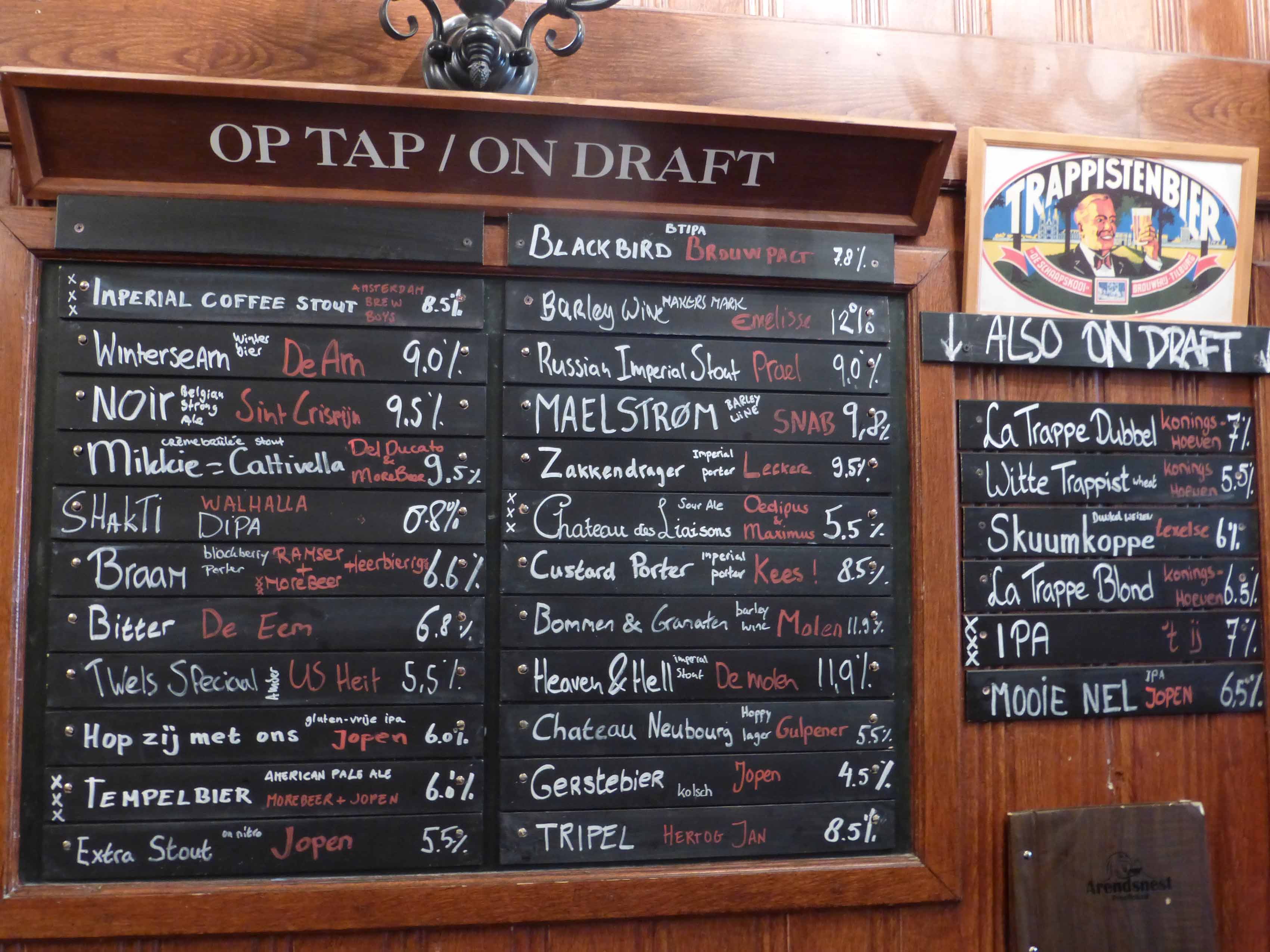 If you like the combination of good beer, different bars and an element of challenge then you could try the Morebeer Tour. This nicely connects the four bars that are part of the same group as Arendsnest, all specialising in craft beers but each with a slightly different approach. These bars are the Arendsnest, the Beer Temple, Jopen Proeflokaal Amsterdam and Craft & Draft. The challenge with this tour is to order at least one beer in each of the four bars in one day and you get a free T-shirt in Craft & Draft. The order of the tour appears to be as it is written here, so starting at t’Arendsnest and working your way south through the heart of Amsterdam. This is something to look forward to as the weather starts to warm up and you can expect to see at least one more of these T-shirts around Amsterdam in the not too distant future.