Whilst it may seem strange to take an assignment break after one month, the Beer Hunter has ventured further afield in pursuit of the smooth sound of jazz to accompany the taste of a fine beer. Having been invited to the final event of the season at De Fermerie in Deventer, it would have been churlish to decline. Had this not been the case, it would have been foolish to decline.

The event marks the close of the third season of Taste of Jazz, a monthly occurrence that spans the colder months of the year from September to April. There is jazz every third Sunday at De Fermerie in the lovely city of Deventer, and an increasingly fine line up. The first few events did not sell many tickets but this was now the second time that Taste of Jazz has sold out. The organisers have established what looks to be a virtuous circle – as the jazz events have become better recognised better bands have been making themselves available to play. As the better bands have played, the reputation of Taste of Jazz has grown and the audience has become larger whilst remaining knowledgeable and rather discerning. As the audiences have increased in size, more bands have become attracted and so the cycle appears set to continue.

Purely by chance, but a real treat 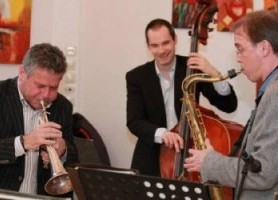 We were lucky enough to be invited by the sponsoring company that also has connections to the British Society. We were doubly lucky enough to attend the performance by the Ben van den Dungen Quartet and treated to an excellent set. The scene was set when we arrived (late due to some kind of fun run event that almost paralysed the city and ruled out our planned walk through the centre) and sat outside in the glorious spring weather chatting to most of the quartet who were also enjoying the weather. This was purely by chance but it was a treat to meet the band.

The music itself was most enjoyable and very well played. All of the musicians were clearly enjoying playing in De Fermerie and the atmosphere can be best described as gezellig. Each artist had opportunities to shine through short solos and the combinations were tight. The band were naturally selling CD’s so we bought a disc of live music titled ‘A Night At The Club.’ This made an excellent souvenir as many of the songs on the CD featured in the concert so it comes with sweet memories.

If you like jazz then the next season opens in September. You can check the program out at their website and order tickets if you find the prospect attractive. Deventer is a lovely city to visit anyway if you can, so this offers the chance to see the city and some fine jazz.