Whilst living in The Netherlands for the past 10 years, I have had a reasonable stab at trying to learn Dutch. Not always very successfully, but, none the less, in a fashion that made life here much more enjoyable and interesting! I have lived in Amsterdam the entire time but am still not completely au fait with the East part, so when I chanced upon a new place there I decided to try it straightaway.

I was rather intrigued by the name of this restaurant – 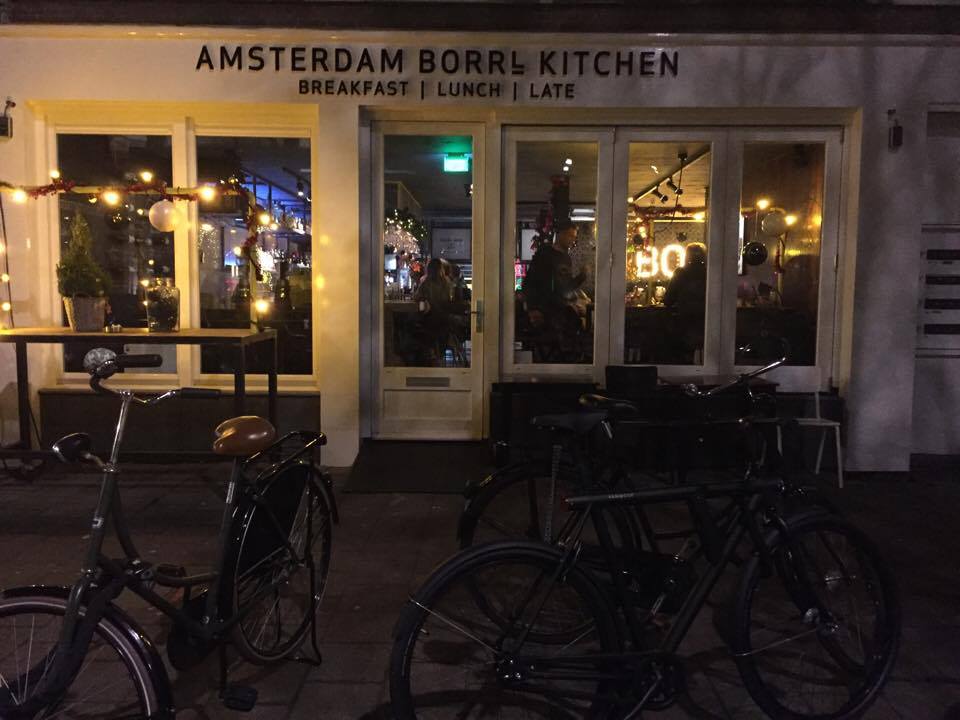 , and set out to see if it really was a true representation of the “gezellig” atmosphere which one would expect to find whilst having a drink socially. It was a cold, dark and dreary Winter’s Wednesday evening and I was meeting up with my friend for our first catch up of the New Year. Upon entering we were greeted warmly by the owner who quickly showed us to a nice table (which we were free to choose) and given a detailed run through of how the evening menu works. There is a small but not insufficient and varied menu which suits equally the meat/fish/vegg 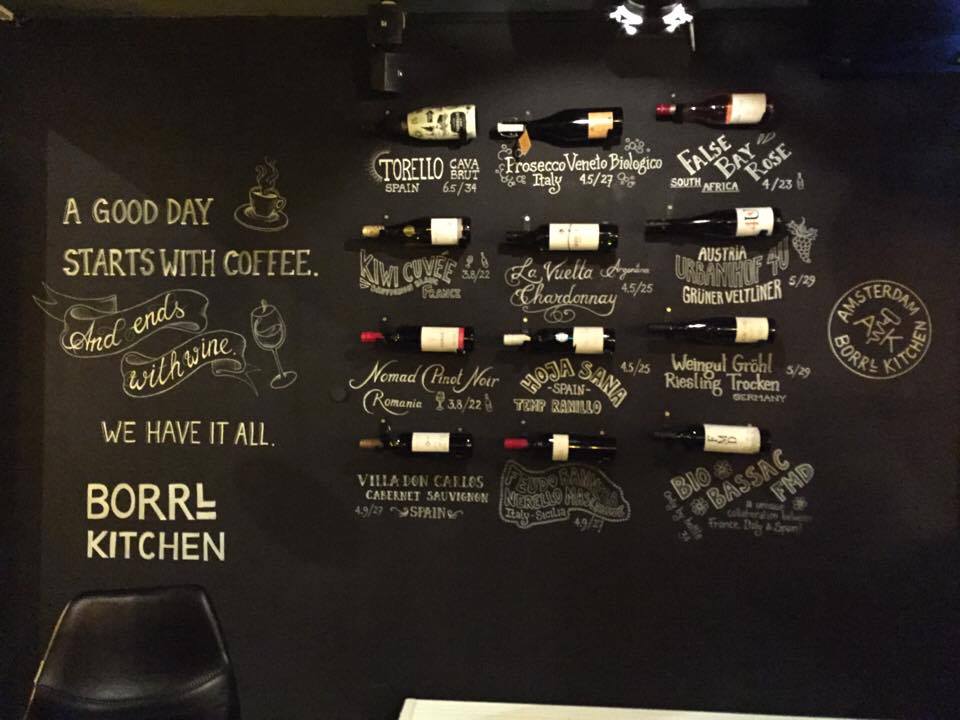 ie diner and, in-keeping with the name of the place, the emphasis is on sharing dishes together to keep up with the non-pretentious, relaxed ambiance. We plumped for the Borrl kitchen platter which was a lovely combination of serrano ham, chorizo, aioli, tuna mayo dip, mackerel and beetroot puree. Alongside this we ordered some good old fashioned Dutch bread, all served on a lovely simple wooden platter. In the meantime we had also received the explanation that the wines which were on offer were specifically priced lower than some of other local establishments, so that the recipient could drink good quality wine but without the rip off, overpriced amount that so many places in Amsterdam charge these days. We opted for the Kiwi Cuvee which originated not from New Zealand as I had thought, but good old France! It was crisp and juicy and again, at a more wallet-favourable price, plus very tasty on the palette.

For the main course we decided to share two dishes and opted for the sizzling gambas and burrata salad. Obviously, eyes b 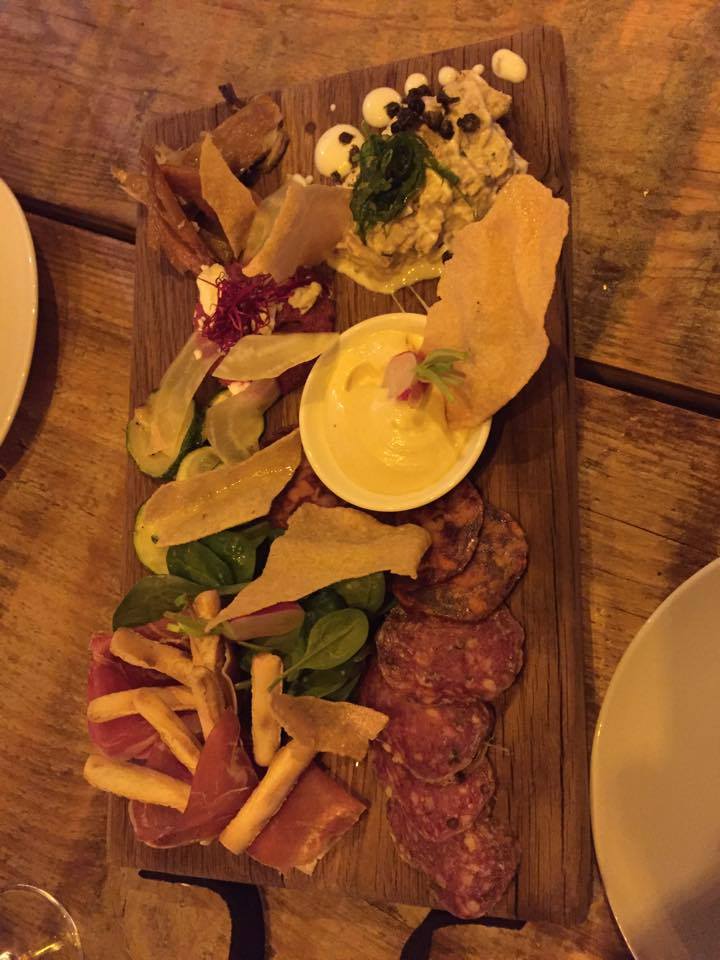 eing bigger than belly, we had a side order of fries (the New Year diet has not yet begun!) which in the end we struggled to finish as the main two dishes were sufficient. Another noticeable plus point was the attention given and received by the waiting staff. It’s often hard to strike that balance between feeling attended to, yet not overly pestered and, on the flip side, completely ignored. The staff there managed that perfectly and this is obviously something that the establishment has paid particular attention to.

Another glass of wine later we chose our dessert, which was a small but delicious selection of home-made apple pie, brownie, white and dark chocolate and raspberry pie. Rounding off the evening with a nice hot tea, we were totally impressed with the 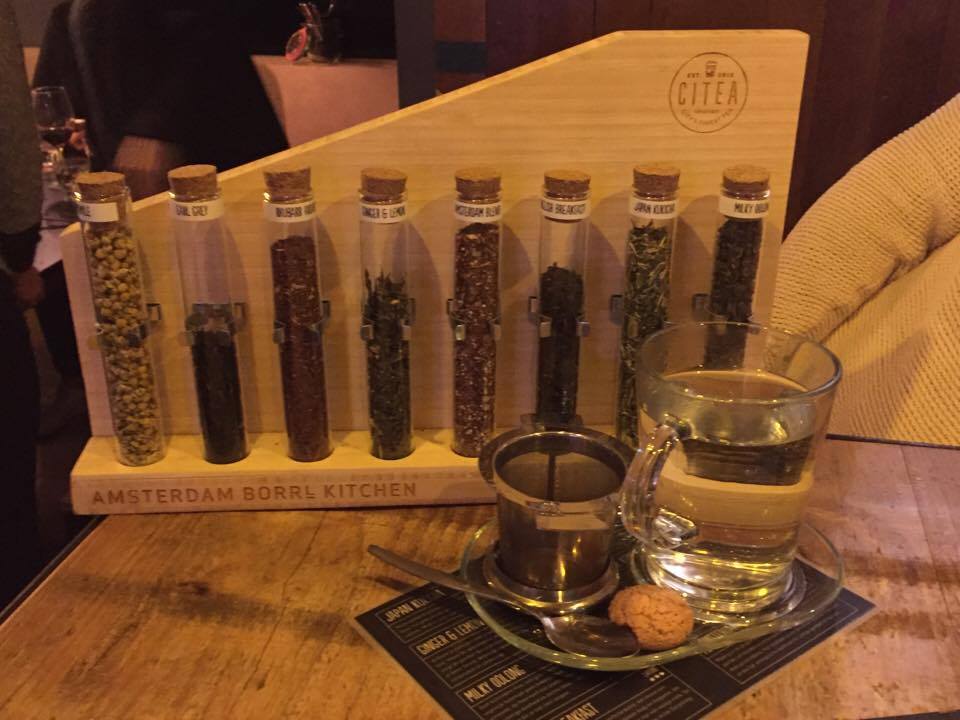 variety and display of options. Traditional types such as Earl Grey and English breakfast but also, rhubarb rooibos (I found this outstanding), ginger and lemon, Amsterdam blend and more. They were presented in quirky looking test tubes for you to choose from.

It was the end of our evening and receiving the bill was a pleasant surprise. Again, it was much less than your typical “hipster” place where to see and be seen appears to compensate for the over inflated prices. A lovely evening with good service, food and ambiance and still money left over to not feel the need to take out a second mortgage! Next time will be for our seasonal ladies borrel which I am sure will be a hit with the wide variety of gals in the group!