TRADITIONAL FISH AND CHIPS ON THE KINKERSTRAAT 24

Homemade Sauces and Sides, Desserts and More. Mix that with our selection of Craft Beers, Funky Cocktails and the cool vibe of Cafe Scrapyard and we will be sure you will have an experience to remember. 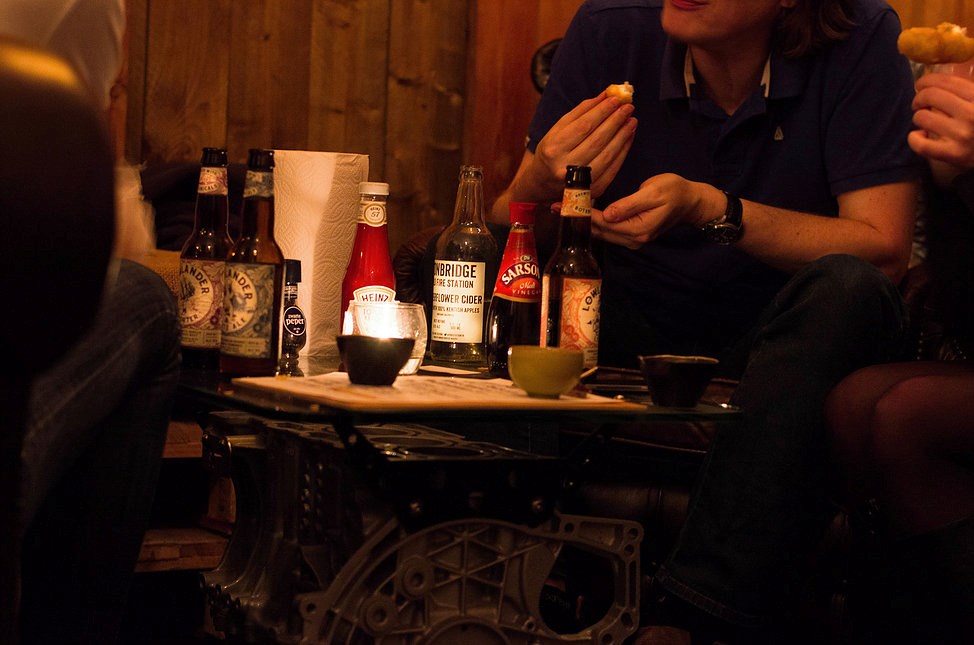 When I saw this advertised I was over the moon, then immediately sceptical.  Proper Fish and Chips are one of the top five things I miss from the UK, but many have tried and failed to bring this British “delicacy” authentically to the Netherlands.  I think the nearest we got was Al’s Plaice (now closed for business) but he just didn’t have enough footfall to do it properly.  The Seafood Bar has a good go and will even bring out the Sarson’s malt vinegar, but it’s not quite “it”. 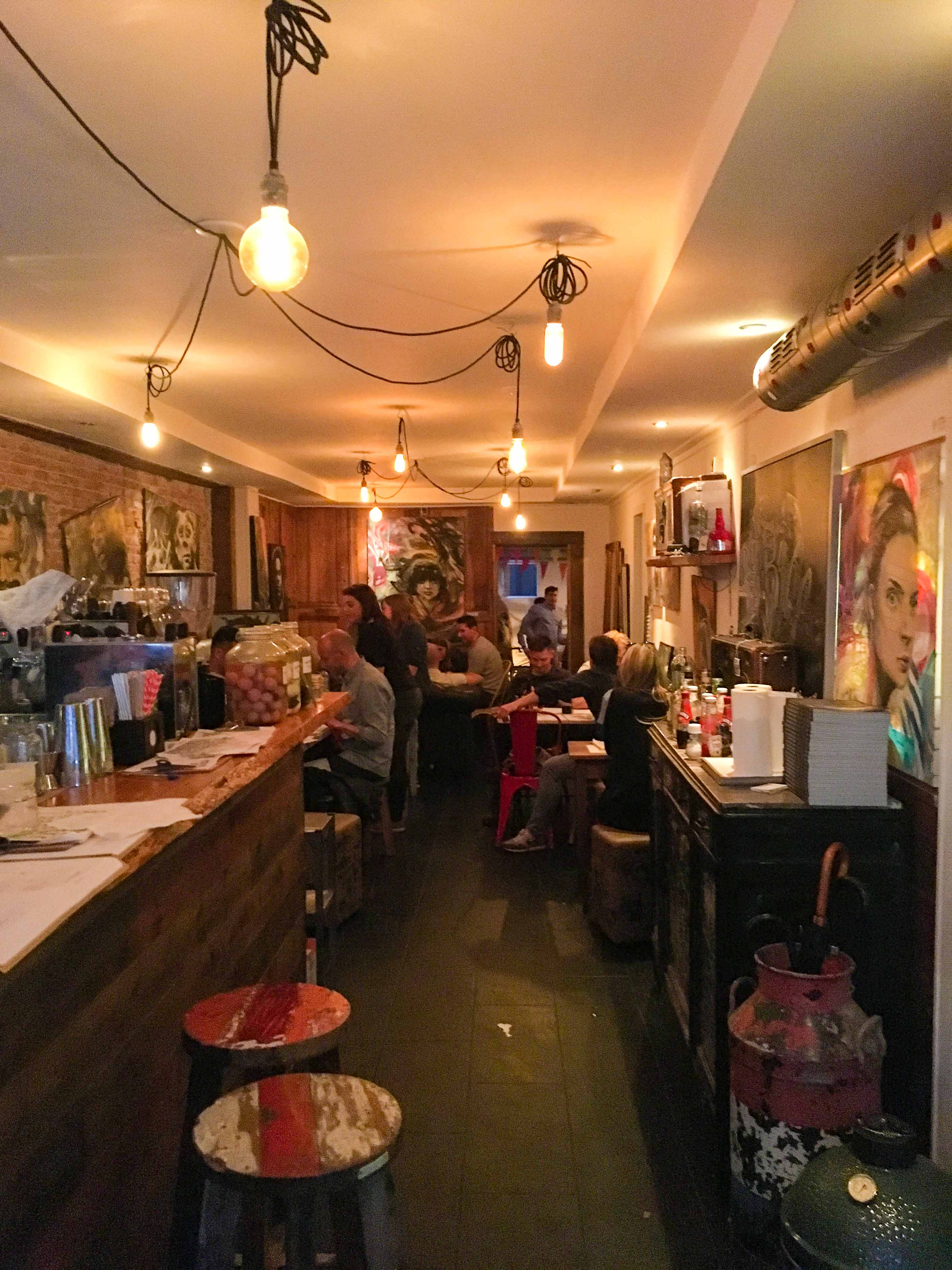 I immediately signed up for the Facebook updates to follow progress and I started to get a little bit more excited when I saw the menu, which contained some pretty authentic-sounding items such as mushy peas and scraps. (Oh the nostalgia of asking for chips and scraps as a kid, trying to get as much for my pocket money as I could, with only 10p burning a hole in my pocket.) Reading on I also found curry sauce, chip butties, battered sausages, pickled eggs and, wait for it, yes, deep-fried Mars bars!  I’ve never had one and they sound disgusting, but it gave me hope that finally, this time, someone would get it right.

Another pleasing discovery was that the Fish and Chips were being married to one of my other favourite things – cocktails.  Great-sounding drinks like Licence Tequila, Puns and Roses, and Peachy Blinders plus Posh Gins and Craft Beers – this was starting to sound a little like paradise.

I decided I would wait and give The Chippy the ULTIMATE trial. My friend since schooldays, Denise, fellow Yorkshire Lass and the girl who would pool her last 5p to share chips and scraps outside Woodger’s chippy, was coming to visit.  If D thought it was good, that would be high praise indeed. 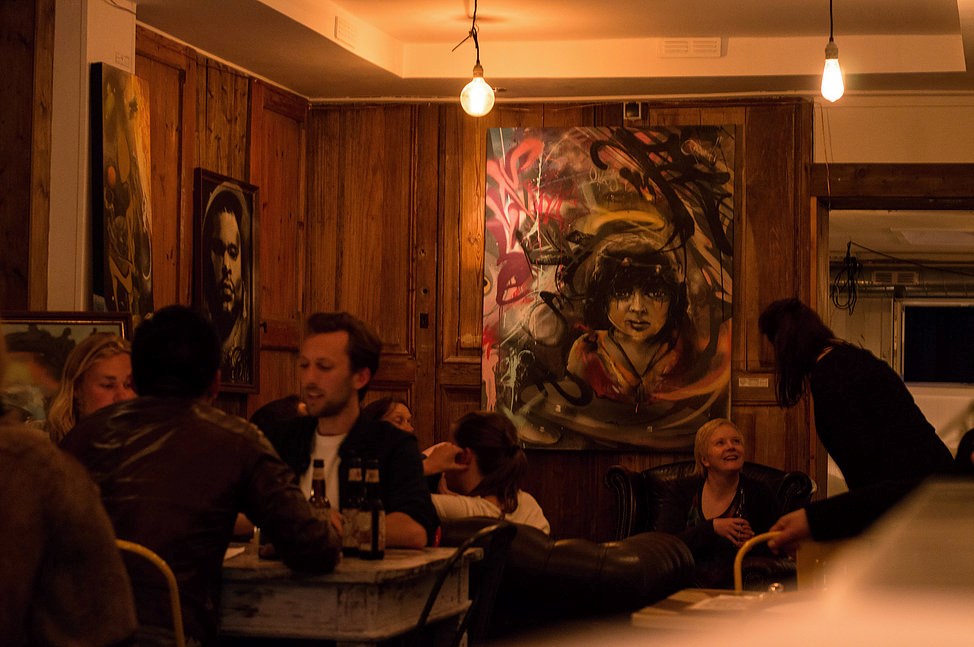 We went along on a Friday night and the place was already packed.  Good sign.  There was a bit of confusion on arrival, as we entered at the same time as a large group of 5 or 6 people, so the girl in charge assumed we were all together and we didn’t get seated.  Then, with all the spare tables gone, we were offered a seat at the bar, which gave us an excellent view of what was coming out of the kitchen and we could watch while the barman lovingly made cocktail creations. In the end we decided to eat at the bar and this was quickly sorted out.

We both went for cod and chips, mushy peas and, yes, you guessed, one portion of scraps, for old time’s sake.  Oh…and a posh gin and tonic each.  I’ve never had a G&T with fish and chips, as I would normally have mine with a strong brew, but I have to say it went very well together. 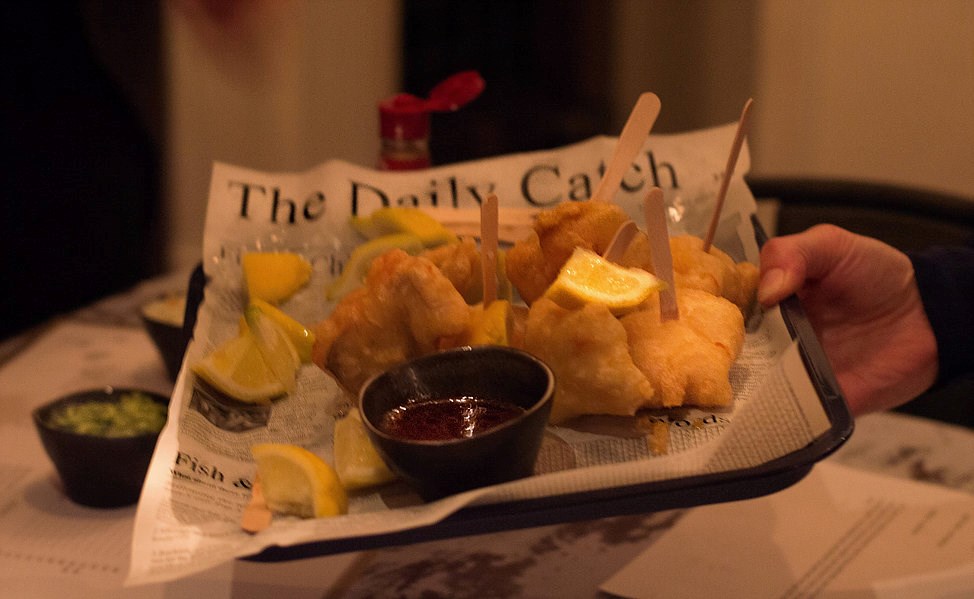 The service was slightly chaotic but very friendly and helpful and it was the first week of opening so understandable that everyone was just finding their feet. Everyone seemed buzzed up and happy to be there and that energy was infectious.

Our food arrived and I have to say, my prayers were answered.  Finally! Proper fish and chips in Amsterdam.  Proper crispy batter, proper double dipped chips, yes the Sarson’s vinegar was there, and the scraps were delicious and gave us both a fit of nostalgia. It all looked and tasted just as it should.  I have read some of the customer reviews and some people were making comments about the size of the fish being too small.  I couldn’t have eaten a full portion if I had been served a bigger piece of fish as it’s a filling meal with all the chips and the batter.

The only thing that needs tweaking in my humble opinion is the mushy peas, which were more like crushed garden peas with (I think) crème fraiche, and they were cold.  I know some people like these “posh peas” but to me, mushy peas should be the marrowfat kind, soaked overnight with bicarb and simmered to perfect mushiness for about 25 years!  My friend D said she would bring some in her suitcase for the chef next time she’s over, but for the rest, this restaurant made a couple of Yorkshire Lasses very happy.  I’ll definitely be back and hope that this place (notice I didn’t use the obvious pun!) will stick around and keep on serving ‘em up, hot and fresh… with proper mushy peas.