I have always been suspicious of the restaurants around RAI.  To me, they all look like they are catering for the exhibitions.  The prices are a bit too high and the few restaurants I have been to I don’t really rate that highly.  I had persuaded my girlfriend to take me bowling for my birthday and so we were looking for a quick bite beforehand.  I had remembered there was a Chinese and a Pakistani restaurant on Scheldestraat.  It seems that the Pakistani restaurant is now a brand new Indian Nawaab which I am looking forward to reviewing soon.  In the end we chose Oceania without really knowing anything about it.

It is a very upmarket Chinese restaurant which specialises in seafood, which you realise as soon as you open the menu. There are around 5 pages of main courses involving fish and 3-4 pages of starters, a lot of which have fishy elements.

It was clear I was not going to be able to do my regular Chinese order of lots of starter-y things and one main course between 2.  It was clear that fish was the star of the show here and it was my birthday and so I was going to go for it.

The starters we ordered were a prawn satay for my girlfriend and I ordered the crabmeat and sweetcorn soup.  One thing I never even thought about doing was to even look at the prices for these things.  This I would regret at the end.  I did spot, as the menus were being taken away, that the sesame prawn toast was €16.50.  I thought that was expensive, but never really questioned it further.

The wine menu is extremely extensive and I decided to go with my favourite wine to have with fish; a Pouilly Fumé.

We ordered a steamed medium-sized Turbot for mains, with some steamed rice and Pak Choi with garlic and chili.

The prawn satay which came out was not your traditional Indonesian peanut sauce affair, but they were using the term merely for something on a stick.  The sauce was a rich soy based sauce bordering on barbeque.

The delicate little bowl of crabmeat and sweetcorn which was laid before me was great.  I could tell it was fresh crabmeat rather than the crabsticks which most places use.  It had that typical MSG thickness and was nicely sweet. I added a couple of drops of chili oil to pep things up a bit.

OK nice. It was going well.

The restaurant is lusciously decorated with wood, Chinese watercolours and a golden log in a fish tank with some writing on it!  The tables have proper table cloths and the cutlery was screaming that this was a classy establishment.  Add in the smartly attired waiting staff, even the girls had a tie, it was classy. The music was appropriate for the venue and unobtrusive. 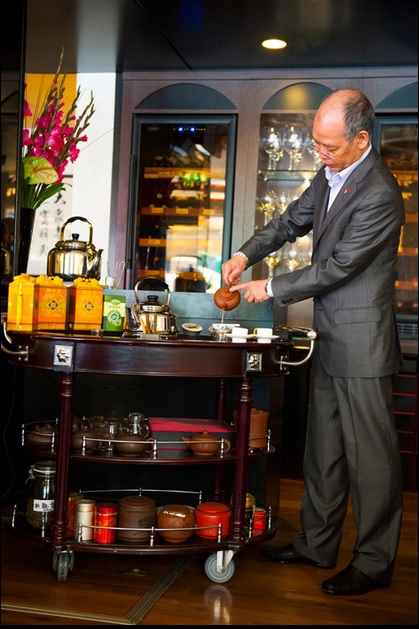 The turbot dish came out with great flourish and was displayed for around 10 seconds before being whisked away under the hot station to be prepared.  In blink of an eye a small taster of the fish arrived on a plate with our rice and vegetables. The undressed fish came back to the table after a couple of minutes and we began to spoon pieces of delicate flesh on to our plates with some of the accompanying steaming liquor. The fish did not have a chance as it was hoovered down in a matter of minutes and even the fish cheeks were eaten for good measure.  The Pak Choi was steamed nicely and the simplicity of the delicate white fish, steamed rice and vegetables brought joy to my heart.  The fish was beautifully cooked and the liquor was extremely tasty.  All washed down with some Pouilly Fumé.

I will go back again but I think I have a cunning plan, as Baldrick would say.  Take say a cheaper fish like snapper or seabass, a small one and have it grilled or fried and as a starter.  Then take the medium sized turbot or halibut steamed as your main.  You will pay about the same price as we did for our meal this way.