Many of the best cities in the world have a “central park”, and Amsterdam is no exception.  Just beyond the Leidseplein and near the Museum Quarter lies the Vondelpark, named after the author Joost van den Vondel and open to the public since 1865.  The Vondelpark is 120 acres of public parkland with something for everyone; walking routes, picnic spots, pretty scenery, fountains, wildlife, cafes and playgrounds – no wonder it  attracts 10 million visitors annually.

I am lucky enough to live very close by and I visit the park nearly every day, very early in the morning, for a “wun” (a cross between a walk and a run).  I don’t think anyone would describe it as jogging, but my slow-paced exercise at least enables me to take in the sights, sounds and smells of the early morning park.

For me, early morning is the best time to go as you get the park almost entirely to yourself, save a couple of bleary eyed dog walkers, some fitness enthusiasts and a sleeping tourist who couldn’t find his hotel the previous night.

In Spring a morning walk around the Vondelpark is like wandering onto a Disney set.  The birdsong is deafening. Green parrots squawk overhead from among the magnolia blossoms. 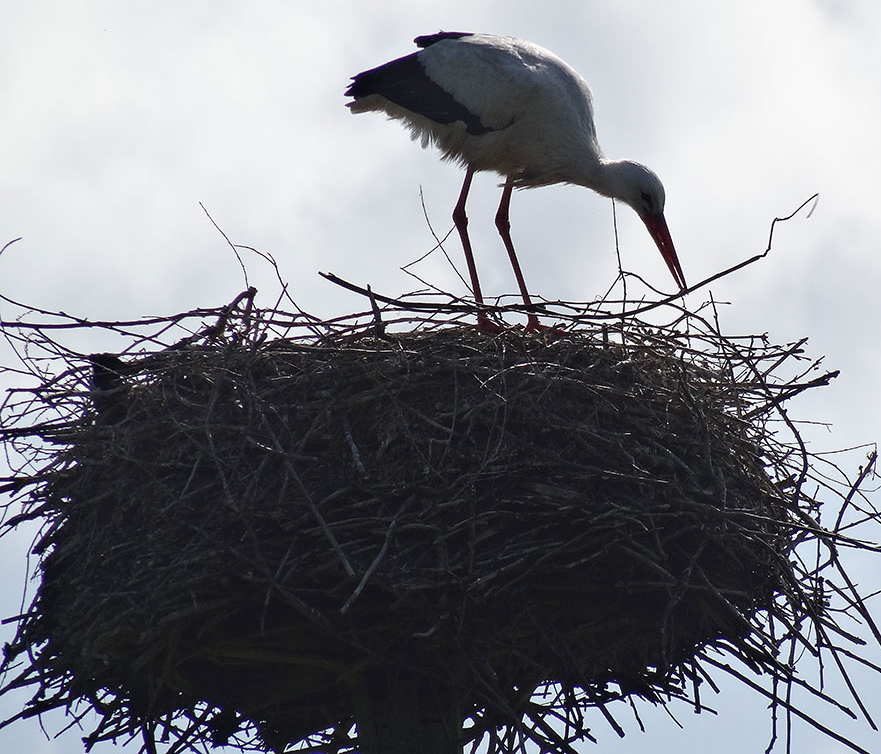 A stork lands on its high nest.

A very bossy goose noisily nags her goslings to speed up across the path in front of me  and a mother duck proudly leads eight tiny, fluffy ducklings across the pond. 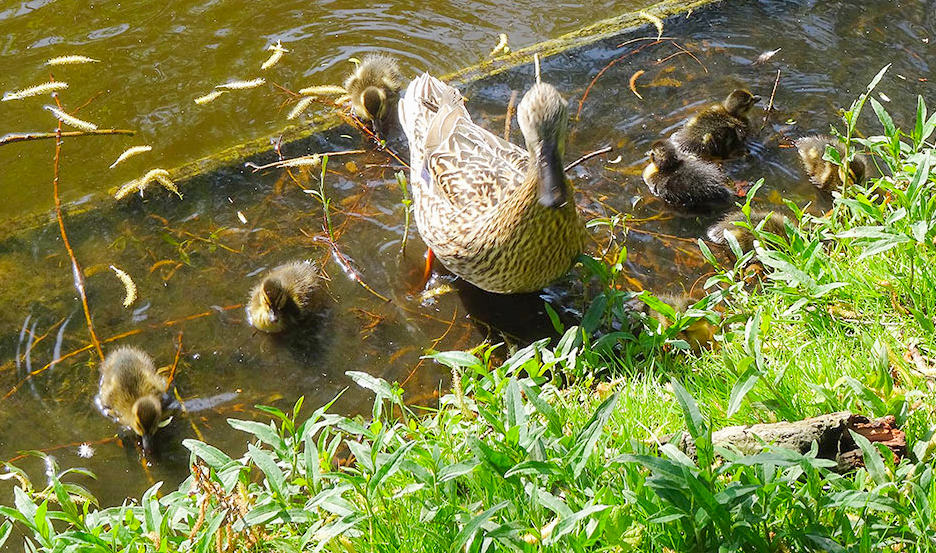 It’s all very calming and a great way to start the day.

If you visit the park later in the day, especially in the good weather, it is a different place entirely.  Nature has been drowned out and forced to take cover from the picnic parties and sunbathers competing for the last piece of green space available.

Music from budding guitar heroes compete with some hip hop from a ghetto blaster (thanks for sharing mate!).  Barbecue smoke and the smell of weed pervade the air and the busy pathways are straight out of a Buster Keaton movie – a hazardous crossroads of cyclists, joggers,  skaters and, last in the food chain, pedestrians.  A bit overwhelming, but there’s fun to found in the chaos. 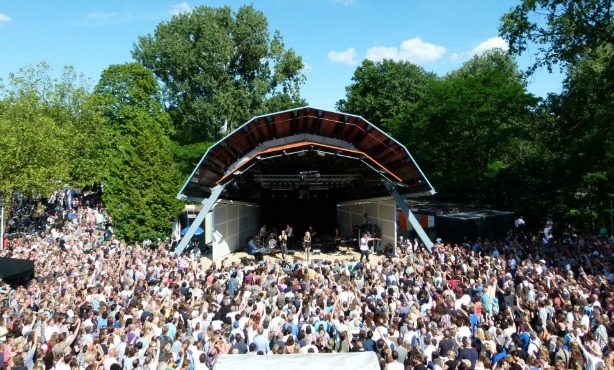 Nighttime is when everything calms and mellows.  The park is quite safe at night, though not very well lit.  The only “hazard” can be the resident Wino’s who will have been on the extra strong lager all day.  The “hazard” mostly amounts to a bit of aggressive banter but it usually remains amongst themselves.  The only downside of saving your “Wandel in the Vondel” for later in the day, especially after a hot sunny afternoon,  is that the beauty of the park may be spoiled by the appalling sight of heaps of rubbish left behind by the day’s picnickers.  It’s overwhelmingly sad how visitors can just scatter their plastic and foil packaging and leave it for “someone else” to take care of but it happens every time there is good weather in the park.  This despite plenty of signs and rubbish containers.  The effect on the wildlife in the park cannot be positive.

There are rules regarding use of the park.  Dogs are welcome but owners must pick up after them and bags are available at all the park entrances.  You can have a barbecue, but only in specified areas (this rule is largely flaunted on busy summer days).  The park is mainly car free, except for an odd patrol car, council truck or a delivery van.  Nothing too restrictive then and there is a real feeling of relaxation and freedom about the Vondelpark.

One of the main attractions in the summer is the open-air theatre – de Openluchttheater – which is situated in the heart of the park. Most concerts are for free and sometimes a well-known name will play a free concert.  I wandered into a Passenger concert a couple of years ago, just by chance.  A list of upcoming concerts is usually posted on the park gates and it can make for a really fun and relaxed evening, a few beers and some live music on a balmy summer day.

Besides picnics and dog walking, the park is a great place for exercise and there are many companies who use it for group training sessions, tai chi, and yoga. There is a small area of artificial turf which is good for 5-a-side football, and there are two tennis clubs in the park, though I understand that membership waiting lists are pretty prohibitive.  The park is often used a venue for birthday parties and with four or five playground areas for kids, one of which has a large paddling pool, it’s a great place to bring the children. 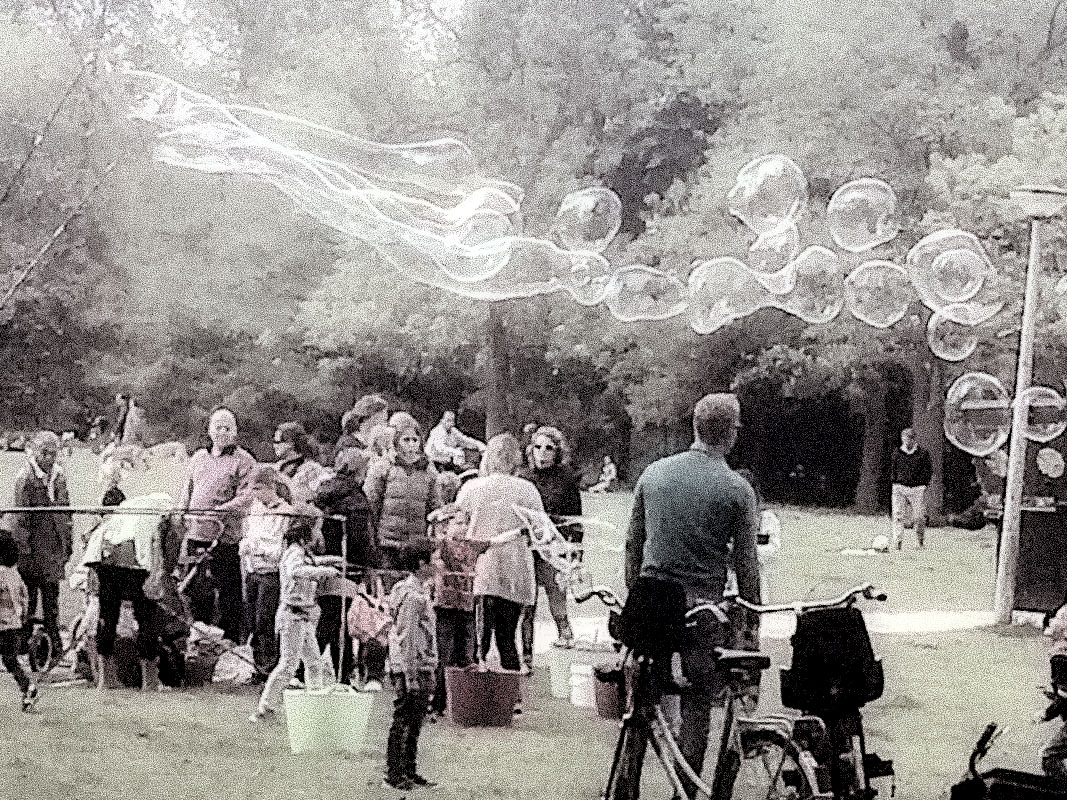